Re Felix Salmons’s post on Whither Bond Returns, who asks: I would like to see a thought-through explanation of how and why I shouldn’t be too worried about entering what is sure to be a long-term period of rising interest rates.

Here is a simulation of what will happen to an investment in a bond fund when rates rise at a steady rate. It shows that you should be worried.

I assume an initial investment of $1 in a par bond with a constant duration. The bond is issued at par, starting with a yield of 1% (for example).

Then I assume rates rise steadily at 0.5 percentage points per year.

Each month, the bond spins off a cash coupon, positive, but declines in value due to the rise in yields. At the end of each month, the bond is sold and together with the coupon, the money received is reinvested in a new bond with the same duration as the original one. 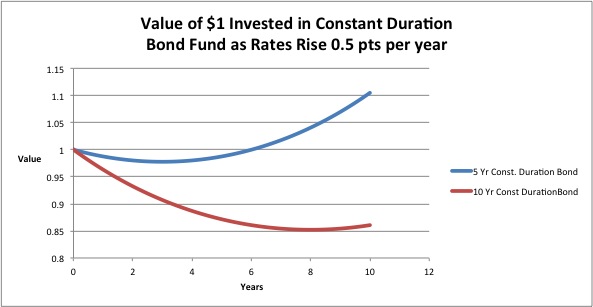 As you can see, a 5-year duration bond declines in value but eventually starts to recover and produce positive returns.

It takes much longer for a 10-year duration bond.

Here is the WolframAlpha code for plotting the function easily (though the graphs above weren’t produced that way):

Now can modify the parameters interactively