It was many decades ago that I discovered Kurt Weill and Lotte Lenye. I had known, of course, about Bobby Darin’s Mack the Knife, but I never knew about Lotte Lenye and Kurt Weill until I came to Columbia.

Down the hall from me in International House, and also studying physics, was Eté Szüts, a refugee from Hun­gary when the Russian tanks rolled in. He had come to New York years before me, and was perhaps a year or two older. His surname was pronounced “Seech”, he always explained, although everyone pronounced it “Zuts”,  and his first name was “Ete”, he said, like summer in French. He and his mother had crossed some mountains into some other country, perhaps Austria, after or during the Hungarian revolution.

Eté often played operatic LPs in his dorm room. He had one album that he played often, and I grew to love it: Happy End, lyrics by Brecht, music by Weill, and sung by Lotte Lenye, who later played Rosa Klebb with a poisoned shoe in From Russia With Love.

Oh my God, what beautiful sad degenerate German songs Lotte Lenye sang in Happy End. I could understand a fair amount of it in the original German because of my parents’ Yiddish even before I learned German. I never grew to love opera, but I did love that stuff. It induced nostalgia for a world one had never experienced, full of romance and love and disappointment in bars and  ”sixpence beds” (listen to Surabaya Johnny) and far-away places. The songs seem akin to Nabokov’s Speak – Memory and Stefan Zweig’s The World of Yesterday: a longing for a place that is no longer there, and in this case, may never have been.

I’m happy to find that someone else agrees with me:

“Time and again [the songs] strike a note of haunting nostalgia that could almost make you cry.”
—Daily Mail, 1965

Eté knew more about America than I did. He’d played basketball in high school and demonstrated to me how the cheerleader girls led the stands in waving their hands and singing

A year later he bought a pair of Corfam shoes, made of a kind of artificial leather touted by DuPont at great  expense. The material failed badly, an early Impossible Leather.

I’ve never seen the opera itself; there was a production in NYC in 1977 with Meryl Streep but I was in England. I looked up the plot and it sounds very confusing, a sort of ripoff of Guys and Dolls. I couldn’t make my way through the summary. But the music and the words …

The Lotte Lenye 1957 version is the best. I used to own it when I still had vinyl. 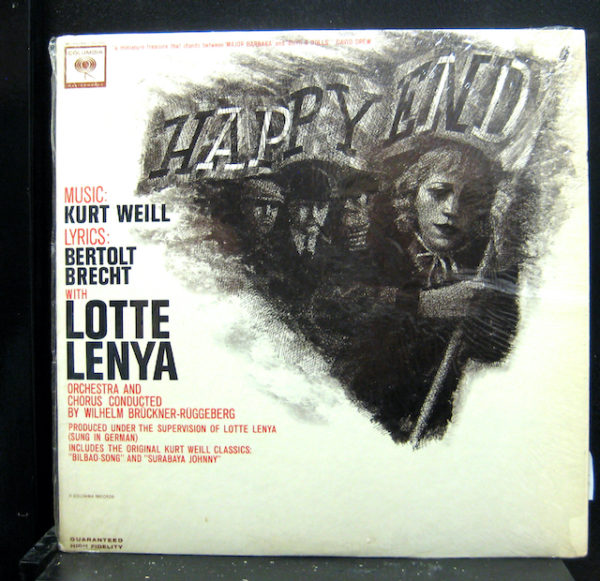 Here are the German lyrics of The Song of Mandalay.

All the songs are good: check out in particular the The Sailor’s Tango and Bilbao Song. I went to Bilbao once and it didn’t do justice to the song. They’reall  much better in the original German and best by Lotte Lenya herself. When you listen to other versions on youtube or elsewhere, the volume of the music overwhelms the words. With Lenya the music is clear but in the background and the lyrics are indispensably and clearly audible.

I’m reminded of all this because I listened to Ute Lemper’s version of them recently. She was good but different — she jazzed them up or made them very melodramatic. This is one of her older albums, and by the way, she lives on the Upper West Side. 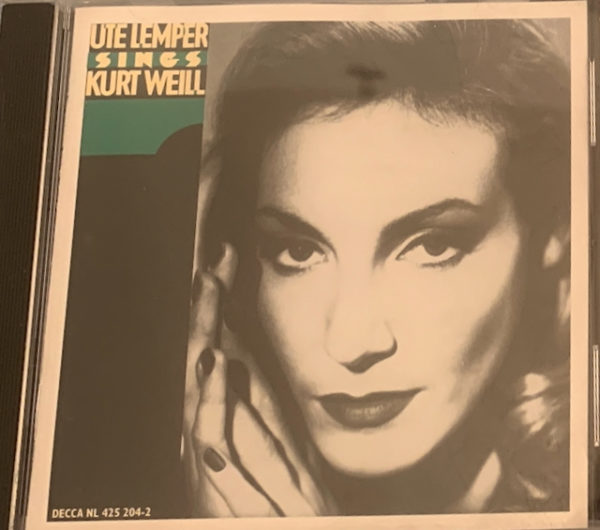 This is a good Lotte Lenya album too. 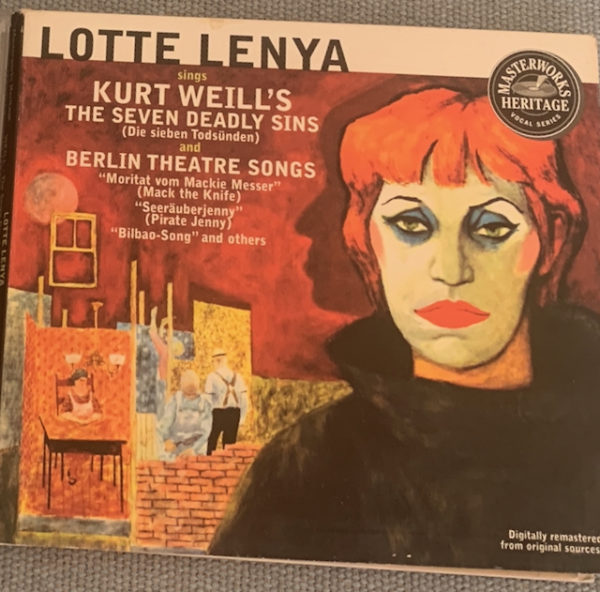 More than twenty years ago there was an outstanding Channel 13 PBS Great Performances show called September Songs, with Weill sung by many different people. An operatic but down-to-earth version of Youkali Tango by Teresa Stratas, a Lou Reed rendition of September Song, a monotone What Keeps Mankind Alive by William Burroughs, a dramatic  Ballad Of The Soldier’s Wife by P.J. Harvey. And more. And beginning it all, a decadent (no other word for it) English-language Mack the Knife performed (no other word for it) by Nick Cave, which is how I discovered Nick Cave’s music. I used to have a taped version of the Great Perfomance’s video but it’s sadly gone and there are only pathetic youtube pirated version on the internet. This is the CD. 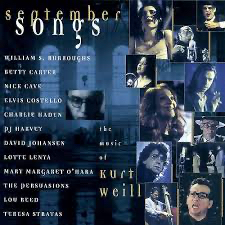 An extract from The Song of Mandalay:

It’s not a happy end, but a realistic one.