In Cape Town in the mid 1950s there were no high-rise buildings. The Old Mutual in “town” was the largest building, right next to the post office. Then, sometime towards the end of the decade, they build the first six-story block of flats in Sea Point, Bordeaux Flats, across from Graaff’s Pool.

Graaff’s Pool – a walled off enclosure about 50 yards into the sea and rocks off the sea-side promenade — had been there for decades, probably since 1910,  and was a men-only nude open-air suntan and sea-access site with walls preventing viewing from outside. 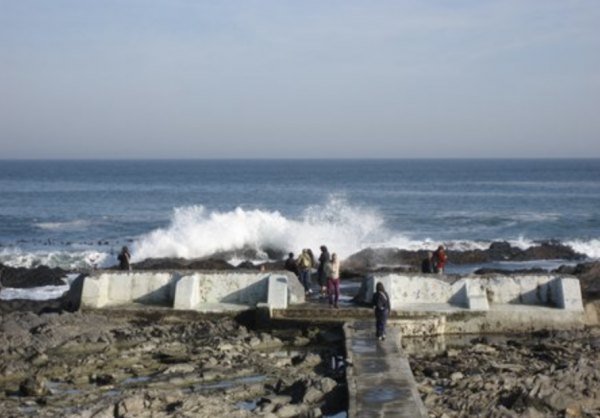 No flats or houses had security devices or even walls in those days. You could pretty much walk into anything. Bordeaux, being six stories high, had a lift, and when it was being built and then completed, my friends and I, probably early teenagers, used to go in there and race the lifts. The game worked as follows: one of you got in the lift, the other ran up the stairs, and first to the top won. It wasn’t heard to beat the lift, and victory was assured if you made it up to the first floor before the lift, pressed the Call button to summon the lift, and then continue to run up.

The sixth floor was pretty high and the view from there out towards the sea and along the beachfront was good.

This is the story that circulated around town in the late 1950s.

An elderly couple lived on the top floor of Bordeaux facing the sea. One day the wife summoned the police to come to her flat. When they arrived she complained that she could see the naked men in Graaff’s Pool, and that it was a violation of public decency.

The policeman walked over to the window and said, Madam, I cannot see anything. The men are behind the wall and one cannot see their bodies from here.

Officer, she said, If you take that dining room chair and bring it to the window and stand on it then you can see everything.