There are older kids on our street too. The B___ family – father, mother two teenage boys — live on the farther arm of Woodburn Crescent. Their two boys, probably six or seven years older than me, have a pellet gun! I know my parents will never buy me one; I don’t even suggest it. But I have used theirs. You bend back the steel barrel from the shoulder stock to open it; you insert a single rifled lead pellet, hollow at the back, into the cylindrical barrel; you re-close the barrel against the stock which somehow compresses air inside; you look through the sights and aim; then you pull the trigger.

The B boys roam the little jungle behind our house and shoot small birds perched on branches who then plummet to the ground soundlessly. They leave them there. What is the point of killing something you didn’t need to kill? Yet I am envious. Sometimes they let me take a shot myself in their back yard where they have set up a rifle range with targets. I fire at a glass bottle. It’s thrilling to pull the trigger and see the bottle turn opaque with internal cracks.

I will never get a pellet gun so I make myself a catapult, a Y-shaped tree branch with a piece of inner-tube rubber tied to each arm and a bit of leather to hold the stone. For ammunition I know what to do. The back covers of the American comics we buy — Batman, Superman, Nancy and Sluggo, Little Audrey, Little Lulu — are plastered with ads for Daisy BB guns. I go to town on the bus to Jack Lemkus and buy pellets and BB caviar-like copper balls. 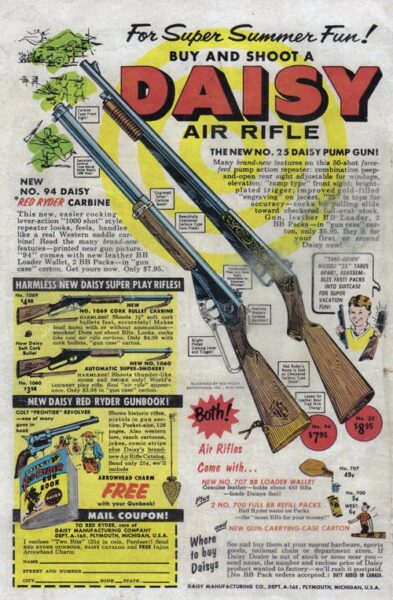 I shoot with my catapult outdoors at all kinds of things: bottles, cans, shoeboxes. I shoot even in my bedroom, the long upstairs porch that has been enclosed by adding windows to seal it from the outside. I situate a bulls-eye target pasted onto a cardboard shoebox at one end of the room and shoot from the other side. Occasionally I take aim from our lawn above street level at a sparrow or pigeon in the trees or high up on the telephone wires that run along the road. Once, to my half horror, my metal pellet successfully hits the center of the belly of a sparrow on the wire. It does not drop to the ground but flies away. What will become of it?

On Sunday mornings my father brings me the comic section of the Cape Times in bed so I can read the adventures of Brick Bradford and his Time Top. There one morning on the front page of the main section is a story about Mr B, the father of the two boys I know, a grey-haired rotund man. A lawyer in his forties, he was found on the floor of his town office with a young Black woman, a consummation that is illegal under the Immorality Act. His doctor testifies that he had prescribed pills for Mr B’s heart condition. Was the Black woman also doing it because of the side effects of a medicine she had been given? I don’t recall what sentence, if any, either of them received.